We’re moving homes, and my wife has been on a shredding mission. While reviewing file boxes that have not been opened in many years, she came across my first business head shots, taken about 20 years ago.

As a working adult, I’ve never had a job, never had a paycheck paid by somebody else. Because I’ve always been in business, I’ve never had a resume. But I’ve always had headshots. These were the first. Amazingly, my wife found not only the prints but also the negatives they came from and even the slides. (Some of you reading this have never seen film negatives.)

I am looking at these photos as I write this. They are spread out on my desk, just above my keyboard. They are in a fancy office that my attorney or accountant let me use. The photographer did our wedding pictures too, because these were taken around that time. The kid in the pictures is eager, enthusiastic and also terrified. I felt, at once, on top of the world, but also I had no clue how I’d cover payroll that next month. Or the one after that.

I was running a computer consulting company, and I had employees back then. And they were far more adept at managing me than I was at managing them. I didn’t really know what I was doing—operating by feel—but I had to make it look like I knew exactly what to do.

Negativity is just as contagious as positivity. Somewhere in this process, I actively chose positivity and optimism. This is what I sell now. And clients pay good money for it. In fact, as my clients apply my principles of selling boldly and begin bringing these traits of enthusiasm and value to their customers, they find that their customers also pay good money for these traits.

You will find that you are the only one who brings positivity value proactively to your customers. Everyone else—the competition!—only calls with problems and issues.

This year, my business will grow bigger still. Why? Because of all the failures. All the learning. And, most importantly, all the perseverance.

A middle-aged man recently said to me, “I’ve never failed at anything in my life.” And I immediately thought that he has not attempted anything challenging or interesting in his life.

The kid in the photos had no idea of the failures and challenges that lay ahead. The grown man with graying hair writing this today is grateful as hell for them. 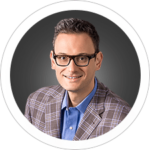 Alex Goldfayn, Revenue Growth Consultancy, can be reached at alex@evangelistmktg.com.