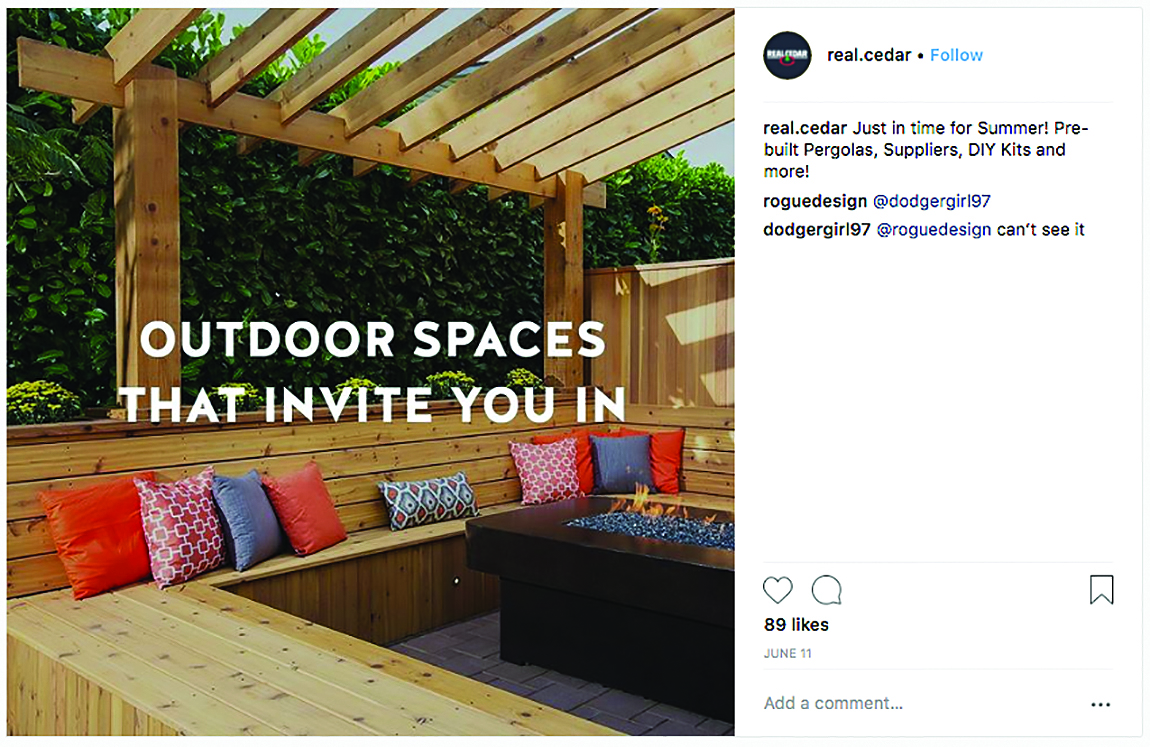 Mining and analyzing data from social media platforms has received a lot of press as of late, and not all of it good. The Facebook – Cambridge Analytica scandal, the Google student data heist, and an alleged election hacking have all illustrated the invasive side of accessing online personal information.

However, there are also many non-nefarious, and legal, uses of data gathering and analytics. In particular, data use employed by advertisers and marketers to better target potential customers and increase sales. This is the case in the western red cedar business.

The Western Red Cedar Lumber Association represents a significant portion of North America’s WRC manufacturers, distributors and retailers, and supports their members’ business through programs including advocacy, education, and advertising and marketing; of which social media has been playing an increasingly bigger role.

Following a downtrend in Real Cedar (the WRCLA’s brand) traffic and Google keyword rankings, the WRCLA’s agency, Bare Advertising and Communications, created a comprehensive audit of their audience for Real Cedar products; what they were looking for, and what would engage them.

This became a priority project for the WRCLA as customer retention and revenue in the WRC business were being affected by growing competitive threats from composite materials, and, perhaps more significantly, new softwood lumber duties.

The first thing the audit revealed was that while a robust online presence was still key, potential WRC customers were spending less time using search engines like Google, and more time on social media platforms like Facebook, Instagram and YouTube to seek information. Much of the reason for this is information on Google can quickly become outdated and thus receive a lower ranking, meaning someone would be less likely to find it in a search. People also generally have more confidence in information and recommendations from peers on social media, and are therefore spending more time on these platforms.

The key difference in the consumer data that marketers can access from Google and, in particular, Facebook, is the depth and accuracy of personal information. Based on the type of website somebody visits, Google will predict what that person’s age, sex, location and, to a lesser degree, hobbies or interests are. But Facebook has all that plus where you like to go on vacation, how many kids you have, the renovation you did to your house, and everything else based on what you’ve posted. It is this type of information that allows marketers to target potential customers with impressively accurate and relevant ads and posts.

To stimulate awareness—and ultimately sales—of Real Cedar, the WRCLA engaged in an analytical breakdown of both the type of content that was generating results, and a holistic analysis of who was engaging with WRC content online. This included looking at specific topics such as who was interested in garden-related topics like how to build a cedar planter box, versus videos on designing and constructing a western red cedar timber frame carport, for example.

Facebook and Instagram data was also mined to understand who the base audience on social media was; it was with this information that Real Cedar ads were then tailored to each social media platform with content aimed at audience interests. Each ad also had a specific call to action, either directing traffic to realcedar.com, or liking a specific comment or post.

Once the ads were launched, all activity was then monitored to determine which ads were generating the highest results and why, and the tactics were then refined to optimize results. If, for example, an ad promoting downloadable plans for a WRC bench was generating a high percentage of female consumers, ad spending on a male audience would be reallocated to maximize success among women.

A tactic known as remarketing was also employed and proved to be very effective at generating awareness and interest in western red cedar products and creating follow-up actions. Remarketing allows a marketer to connect with visitors to their website who may not have made an immediate purchase or enquiry. In the case of the WRCLA, this would be used if a potential customer was interested in decking, for example, but hadn’t looked for a Real Cedar retailer yet (the assumption being they were still comparing products). It allowed the WRCLA to position targeted Real Cedar ads in front of this defined audience as they browsed elsewhere around the internet.

And the results? Web traffic from social media to realcedar.com alone grew by 379% over the same period last year; total visits to the site (from all sources) increased by 23%; Real Cedar followers on Facebook doubled; and followers on Instagram almost tripled. It should be noted that these are all users seeking more information on WRC.

All of which illustrates the growing role analytical tools and targeted marketing now play in keeping softwoods like western red cedar in front of customers, particularly in a market crowded with composite competitors.

Moving forward, the WRCLA plans to continue monitoring and analyzing who their base audience is, and where to reach them. The use of social media to promote Real Cedar has proven to be ideal, not only in engaging consumers already familiar with the product, but to also expose new customers to the value and benefits of using WRC. Being able to predict what products customers will most likely be interested in by region is also a boon for distributors and retailers, who are able to coordinate efforts with the association to meet demand.