It’s perhaps an  unlikely place for $4-billion-a-year co-op Do it Best Corp. to unveil the prototype for its compelling new store design program: small-town Vassar, a dot on the mitten-shaped map of Michigan, nestled in the fold where the thumb meets the hand.

The town started out as a logging community, then spawned some factory work for the auto industry. “It’s very, very conservative,” explains Mike MacKay, who owns Vassar Building Center: “No McDonalds.” But these days, its counterchange farmers have discovered a new cash crop: marijuana. For hemp and oil, of course.

Long before that—back in 1957, to be exact—a couple of gents launched a small lumberyard here, plus another in a town 10 miles down the road, which they soon divested in order to concentrate on the Vassar market—“a stronger community, larger customer base.” They proceeded to build up the outfit, for which Mike’s father-in-law drove trucks. In 1985 his boss told (not asked) his driver, “You’re going to buy the business!” Which he did.

“My wife and I lived across the street from it, running an auto body repair shop, when her father—Vassar’s owner—was diagnosed with cancer. It forced me to take the reins. This,” Mike emphasizes, “was not expected! It was 2005, during the downturn, and I had to learn the business the hard way. I had to navigate it through some pretty tough waters, starting”—ouch—“with reducing staff from 40 to 25. And I was the one who had to have those discussions.

“We had to be super-responsible, super-conservative, which we still try to be (though that’s harder to maintain, now that times are good again.)” That’s Michigander-speak for “We built a brand-new home center.”

It doubled the size and scope of Vassar’s SKUs and added to categories like lawn & garden and kitchen & bath, plus a show-stopping paint destination called The Color Bar. “Our building just wasn’t big enough for our sales, limiting our growth capacity,” Mike continues. “So we started planning a remodel.”

At that fortuitous moment in time, a lot next door came up for sale after its owner’s death. And an adjacent warehouse for a dollar-store operation also popped up on the market: “Higher ceiling, cement and steel rather than [our] wood.” In other words, a vast improvement.

To add to their lucky stars, Do it Best happened to contact Mike to suggest using his company to roll out a brand-new prototype for future stores—an OMG moment. “What does that entail?” was his pick-me-up-off-the-floor reaction.

Vassar would be required to commit to a tight construction deadline—but soon after it was agreed upon, the COVID virus hit and threw all schedules out the window. “We ended up coming up with a beautiful design,” Mike reports. “Things they wanted to try, plus things we’d wanted. They hired a company to come up with strategies for displays, for sightlines. Some were new to them, others represented new ways of thinking—like strategies for end caps. We then had to commit to set up certain products in certain places. Factors like height became part of the marketing and retail strategy, and what they told us would happen… did happen.”

In other words, Vassar morphed from an atmosphere that was, as Mike allows, “male-oriented and intimidating to women, to one that draws lot more couples and women. We added categories specifically for that, like in the K&B department, where women come in for ideas. We doubled all categories in the home décor department, and we’re still learning—still moving things that don’t work. Customers are ‘shopping’ now, not just running in for one specific item and then out.” 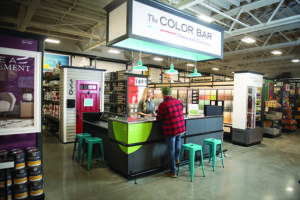 The changes started on the outside. “They proposed a look that would be more inviting, color palettes that were more in-trend, awnings, lighting, even updated fonts in the Do it Best logo,” Mike says. “Once inside, you can see a long ways into the store. There’s not merchandise piled high. We place one or two of each item up front and the rest are in the back. We learned you don’t have to show everything. It’s a clean shopping experience. Most guys won’t care, but women want it clean, with wide aisles, organized, easy to shop, easy to buy.” They are not impressed to discover, “Oh, I see you have 20 of those….”

The nicer retail feel extends right down to the endcaps. Mike shares, “Before, the endcaps were promotional, they were all about the deal. Now we have ‘storytelling endcaps.’ They are set back, lower, wider and showcase different products. One has about five birdhouses—one for hummingbirds, one for finches—with different foods and a picture with a bird. They’re very graphical; they tell a story. They’re interesting, they pull you in and give a different experience. They might not even show a price.” Vassar still has its share of promotional endcaps for exceptionally good deals, but they’re supplemented by about five storytelling displays.

In fact, the whole store now tells a story—the story of Vassar Building Center. Much of the new signage and wall graphics are specific to Vassar and its history. “You walk around and see the people who were here, the old buildings, and a big graphic of the team now. It tells our story. There are statements about trust, loyalty, customer service. (The signage is) more intent on talking to the customer and more about the store.”

Convenience and service were prioritized. Customers don’t want to wait in long lines. There are now four checkout stations, instead of one. There are also multiple stations throughout the store where shoppers can find help. “Just look for the yellow pendants and the yellow signs,” Mike advises. “Yellow signifies service.”

The added space and the broader customer base allowed creating two huge departments from categories that had been afterthoughts, the first being workwear. “We wanted to get Carhartt, but couldn’t due to a deal with other stores in the region,” Mike reveals. “So we brought in Ariat—workwear with a western flair, steel-toed cowboy boots, jeans. We also expanded another line, Berne, a Carhartt-type product. A large portion is workboots—Danner, Muckboot, Irish Setter. We stock a tremendous amount. Customers can come in and try them out.”

An even bigger expansion came to their once-paltry outdoor grill department. “We had Traeger and two or three Webers, but didn’t have room for Big Green Egg. Now we do,” Mike says. “We also added Blackstone, more Webers, and an even higher end line, Napoleon. We are staying away from the commodity-type grills.” 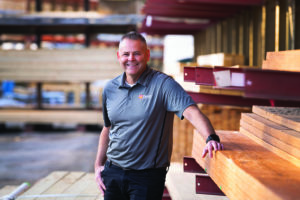 So how do you finance a 20,000-sq. ft. makeover? By another of those right time-right place coincidences. “We were just ready to commit, when our local bank shut down. But just then, a person from another bank called on us. ‘We need a bank!’ I told him. ‘We’ve got a big construction project.’ ‘We’ll work with you,’ he said: ‘Don’t worry.’ It was settled by a handshake.”

Which now meant ramping up the employee count. Vassar was operating with a staff of 35, down from 48 before the downturn. “Turning to Facebook doesn’t work for us—our culture, our values are different. One way is, our vendors know we’re always looking for good people. So do our employees. They know a good fit. For instance, recently a man walked in and announced, ‘They tell me I should work here.’ We didn’t have any openings but, oh my gosh, he was so nice! We had to have him in front of a customer. It was a good fit, a lifelong decision. We’re looking for ‘forever’ employees who’ll retire here.”

Why do they stay? “It’s a cliché,” Mike is the first to admit, “but it’s because we treat them like family. Really good communication. Flexibility in scheduling. My dispatchers do everything they can to accommodate a kid’s soccer game or whatever, even if it means being short-handed. People like to work in a place like that—like I was treated, too; I left my family business to come here.

“We pay as much as we possibly can, making it super-hard to leave. I also make a point of walking around, like, ‘Got your Christmas tree yet? How was your weekend?’ I sit back and listen, show caring. Even among those that have left us, half have later returned.”

What’s good for retaining staff is good for retaining customers. “Contractors like us because we make sure their day’s activity is made easier by doing business with us. They could pick anybody, but we become extensions of them. It isn’t one big thing [we do], but a combination of all the little things. For instance, we recently made the wrong delivery; our salesman screwed up and the customer was disgruntled. So we decided to buy him a new Carhartt jacket. It wasn’t ‘How do we budget that?’ We just did it. And he’ll remember that; it cements a relationship. And relationships matter! Without him, we’d be one less contractor. We deliver, we bill, we answer phones and everything else on time. It makes it easier [for them] than using the next guy.”

Under COVID, those contractors, which provide 75% of Vassar’s business, are doing remodels and decks because locals are not selling and moving—rather, hunkering in place but improving where they hunker. “We’ve added carpeting, flooring and drywall. Plus, adds Mike, “We’re serving more walk-ins. The store is jam-packed with folks we’ve never seen before—and that began even before we opened the new building. It’s been an eye-opener.”

It’s also provided some learning experiences, like it or not. “We’re changing our model. It’s not the best use of our staff to put the best people at the cash register—a bad use of talent. We need them walking the floor, so we need to bolster the number of part-timers at check-out instead. The new building allowed for a lot more inventory, a total change for us, and sometimes it’s hard to re-educate the staff. We know enough,” he laughs, “to know we don’t know enough.”

Clearly Mike loves it here and will be around for, well, forever. “I love the challenge of being the best. Yet, like in athletics, there’s younger competition coming up. I’m like a coach. I can’t do by myself, so I’m teaching a team of all-stars. (However, one of the challenges is, how do you develop all-stars out of ‘normal’ people?)

“So what I’m doing is, looking all over for good staff. We just hired someone who came from a veterinary clinic—a customer of ours, plus related to one of our drivers. He’s not a builder, but a good listener, easy to talk to—caring and compassionate. So we’ll train him. And that’s my challenge: to train a team of all-stars. It also helps to have partnerships with our vendors; they like to deal with us and we want to respect them, too, to foster good relationships in the long-term.”

But, beyond forever? Mike is not leaving it to chance. He has a son starting out in the business on the ground floor (okay: the yard) just as Mike did, and a store manager who’s put in 10 years of valued service. “My goal,” Mike states, “is to set up the company for longevity after myself, so it will be still strong, its values still its values, and a valuable asset to the community. It’s a culture, and we try to instill that in everybody.”