A special series from NAWLA

The building materials sector has so much to offer working professionals but, sometimes, figuring out where exactly you’re meant to be is half the journey.

The key to finding your place is understanding that the first job you’re hired for in the industry probably isn’t going to be the one where you ultimately carve out your career. More than likely, what you thought you wanted you may turn out not to be what you want at all.

At the same time, what you assumed would be a straight path to your dream work might just include some twists and turns along the way. And my experience is just one example.

The industry is filled with insiders who expected to stay only for the short term; but they fell in love with the business and the people, and now they’re here for the long haul. In my case, it was always part of the plan to make a living in wood products. Growing up, I thought I wanted a job that would allow me to work in the outdoors so, as an undergraduate student at Stephen F. Austin State University, I chose to pursue a bachelor’s degree in forest management.

As I continued my education at the graduate level, those boyhood aspirations of laboring under the open sky began to evaporate. Don’t get me wrong—it’s still a dream job for many members of this industry—but I’d had an epiphany: I wanted to become a professor. I got the bug while serving as a teaching assistant, and this newfound focus steered my academic route in a different direction.  After obtaining a master’s degree from the same college, I enrolled in a PhD program at Oregon State University, which hired me on a few years later.

I had the background and desire for the teaching position I’d worked so hard toward for years, but if you think that’s what my first position in the industry was, then you’d be wrong. When I finally got hired, it was in the role of “extension specialist,” which entailed helping people in the wood products industry solve problems. It would be two years before I actually got back in the classroom—this time as the instructor.

I went from wanting to work in the outdoor setting to wanting to teach to starting my career doing something completely different from either of those! Despite some level of disconnect at times between what I wanted and what I was doing, I was still happy to be working in this industry. My time at OSU was highly rewarding and, once I did finally assume some teaching responsibility, this aspect quickly became my favorite part of the job. I’m proud of the impact I’ve had on the lives of my students—many of whom continue to keep in touch, even after a decade.

More To Be Done

As fulfilling as my research, teaching, and other projects at OSU were, I knew my path would stretch beyond those experiences. I’d always contemplated the idea of making a move into the private sector, which I thought might be more suited to my personality. I’m a “people person,” and I like the energy of working on a team.

The one downside of being in an academic environment is that you basically work in isolation. I did that for many years before finally deciding that it was time for me to find that team setting that I wanted. I thought industry was probably the right place to look, and the search brought me to Timber Products Co. just this past summer.

As director of marketing, the work is very different. Before, for example, I worked with numerous building products firms, which was great. It gave me a lot of insight into the way multiple companies work, and I was able to help them solve small problems. The challenge with that is that I never felt that I solved the “bigger picture” with those companies. I was providing input from the outside, but now I’m on the inside, so to speak. That positions me to provide input in a different way because I can now see the bigger picture for the company, in terms of knowing what direction we want to go and having a role in helping us get there.

At the same time, my responsibilities related to internal communications in addition to external communications allow me to retain and transfer some of my OSU experience being in front of a group lecturing. I also work with a great group of really good people who are a lot of fun but who challenge me in new ways every single day. One of the best aspects is the shared vision embraced by all members of the team. We have one direction that we’re all pulling in, which is something I really enjoy but was missing in the academic setting.

That’s not to downplay scholarly work—the science end of the industry is invaluable and perfect for the right individuals. As is the teaching component. As are the profession’s outdoor operations. And every position in between. The takeaway is that there really is something for everybody in the building products business, even if it takes some time to see what that is for you, specifically.

The advice I always gave my students during my years as a professor, and which still applies, is this: when you’re looking at your first job in this industry, don’t look at what that first job is, necessarily. Instead, look at what the opportunity is five or 10 years down the road.

Also look for a company that’s willing to bring you in and give you exposure across the organization so that they can identify the right fit for both parties. A lot of firms do this well—they might hire someone as a new management trainee, who then might spend six weeks in different components of the business. The trial periods give them a chance to “try on” different roles and figure out which one fits them best.

The takeaway is that as long as you have passion and honesty, as long as you are unafraid to try something new, and as long as you take advantage of every possible opportunity to network, you can and will be successful in this industry. 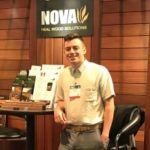 Chris Knowles is director of marketing for Timber Products Co., Springfield, Or. (www.timberproducts.com).