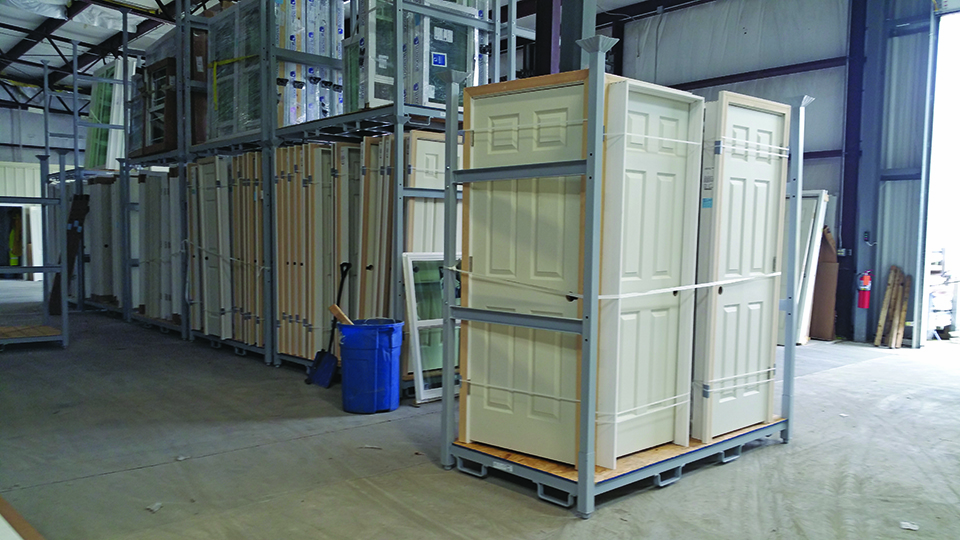 Portable stacking racks for millwork and other building materials are not new, but over the last two years—and particularly the last two months—demand for the storage devices among dealers has gone through the roof.

“These are a growing trend, but not a new idea,” noted Travis Darnell, of CT Darnell/Sunbelt Rack. “We first developed this rack for Georgia-Pacific back in the late ’90s and have been successfully selling it ever since. We have many thousands out in the field that successfully improve millwork operations throughout North America.”

Over the last 10 years, Krauter Auto-Stak has increased its portable stacking rack sales tenfold, to the point it has been maintaining an inventory and turning two truckloads a month, holding 2,000 racks apiece. In April, it had to order four truckloads. In May, it ordered eight truckloads and by the time the shipment arrived, seven of the eight had already been sold.

Chris Krauter attributes the growth to the overall trend toward containerization in shipping. “Look at the railroads—you rarely see boxcars any more. They’re mostly piggybacks with containers on top,” he explains. “The container is left intact from manufacturer straight to end-user. It cuts down on handling.”

Dealers are discovering that portable stacking racks can serve the same purpose, which is especially valuable in decreasing opportunities for damaging expensive windows and doors.

Instead of unloading the delivery from the millwork manufacturer, storing it by hand, later loading it on to a delivery truck, and ultimately unloading it at the jobsite, the product goes straight into a rack, where it remains all the way to the builder.

“They will load each order into a portable stacking rack, mark it off, and stack them up like sardines in a very small area. Some dealers even grid the floors off—that’s A1, A2, B1, B2, so they can keep track of where each job is,” Krauter explains. “When the customer is ready, they’ll drop off their kitted order at the jobsite using a three-wheeled forklift on the back of their flatbed. Sometimes, they’ll even leave the rack behind and drive off, saying they’ll return next week to pick up their frames.”

Krauter Auto-Stak originally offered a single standard-sized rack measuring 45” wide, 90” long, and 94” high, which are large enough to accommodate a 6×8 door that’s framed out and still fit inside a box van. But two years ago it introduced a “tall boy” model, measuring 110” high, to store the increasingly prevalent 8-ft.-tall residential doors.

“You can get an 8-ft. door in a 94” rack but then you can’t stack it,” Krauter explained. “Twenty percent of our portable stacking racks are now 110”, and the last two truckloads we sent out were nothing but tall boys.”

Traditionally, the racks have been U-shaped, like a baseball backstop. The product is placed inside and strapped in across the front. Krauter has begun also adding backstops in front, which can be used to create shelves for holding another level of windows.

The racks can also be used for kitchen cabinets, rolled roofing, and other building products. Dealers are seemingly finding new uses by the day. “A guy will buy one and come back and buy a half-dozen,” Krauter says. “It’s like cigarettes—they can’t stop!”