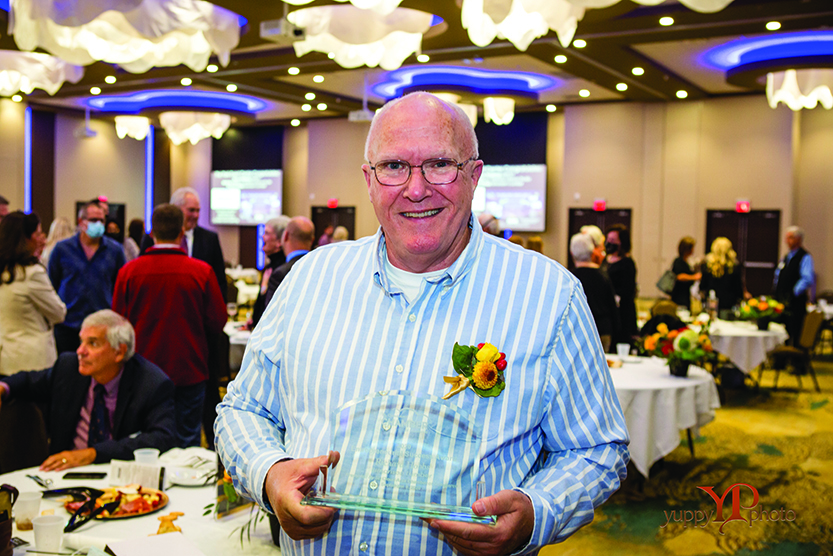 As a little kid, Richard Hobbs had big plans. “When I grow up, I want to be a Senator,” he told his mother. As second-generation co-owner with her husband of Simonson Lumber, today headquartered in St. Cloud, Mn., she delivered the verbal equivalent of a slap up the head: “So everything Grandpa Nels worked for would be wasted?”

The Senate’s loss. “I never worked anywhere else,” allows Richard, now 70. “I started in, at age 10, along with my brothers, riding my bike to work for a dime an hour. I’ve done every job from janitor to cashier, bill collector, hauler, yard manager. Everything.” Just like Grandpa Nels, whose work history involved renting land on a handshake for the first of his cache of lumberyards, dating back to 1913. (He also sold Model T parts and snow fences. Oh, and a gas station or two.) “He was a remarkable man; stories abound. If he were alive today, he’d still be innovating,” says Richard, who’s assumed that role, along with the tendency to buy and sell yards around Minnesota as if they were used cars.

When his parents became ill in the early ’90s, Richard officially took the helm and drove the revenue from an annual $7 million to well over $60 million before the recent recession. His first Aha! move was in consolidating a mini-empire which had sprawled, over time, to 15 yards—always a fluid number as companies were bought and sold. Today there are four Simonson yards outstate and two in St. Cloud plus a truss plant, acquired with a recent purchase of  St. Cloud’s highly-regarded Mathew Hall outfit upon its owner’s death in 2019.

“Our yards were all competitive rather than cooperative, however; no centralization,” he says. “Each, for instance, had its own bookkeeper. A negative feature of small yards is the overhead. So I consolidated things like accounting and purchasing. Today, it’s all cars or trucks, which small yards cannot do: a disadvantage for them. It would make me mad,” he remembers, back at the outset. “They’d tell me, ‘I’ll sell you three units off a truck.’ ‘No!’ I’d come back. ‘Instead, tell me how to achieve a better store! Tell me how to earn it!’ That’s really important to me. That’s where we want to be.” And now, that’s right where Simonson is. Richard boasts three full-time buyers. “I just hired a lumber buyer who saved our neck as prices tripled.”

They’re part of a staff of 200 “talented people, who make enormous sacrifices to work for us. We’ve seen it all since 1913, made the mistakes, to grow larger, achieve good market penetration, do mergers. But!” he emphasizes: “What’s even more important is, how much we all care for each other.

“I hope to lead the staff by example. I take on young people and write ‘grace and compassion’ into the job description. We’re ‘the company of many chances,’ so you won’t get fired. I won’t get mad at you. We’ll use grace and compassion. These days, of course, we’ve grown to have an HR Department, headed by Michelle, who’s really bought into the idea that ‘We’ll make it work for you’.”

Low to no turnover, then. Super loyalty. “When we buy a yard, we keep on the people—and the customers,” he reports: “even people who said they’d never darken my door. When we bought Mathew Hall, the three Hall kids stayed on. It’s all about the people,” Richard reiterates what’s become his mantra.

And those all-important people include—indeed, are venerated—the contractors who shop at Simonson, who represent over 90% of its customers. “What do they like about us?” Richard muses. “That we buy cars and trucks,” thanks to the volume-purchasing power his multiple yards delivers. “Those contractors are tough guys,” he praises. “So much is asked of them, so you want to help those guys out. It’s a teaching thing,” he points out. “If they were all so wonderful, vendors wouldn’t need us; they’d deal direct.”

What those pros are building, says Richard, “has changed dramatically over the past 10 years. Now, multi-family is the big trend. Although my parents taught me, ‘Too many apartments!’ that’s not the case today. And that’s a big reason why we just bought Mathew Hall—because they had a truss plant we couldn’t compete with. Now,” he instructs, “it’s time to experiment with wall panels. Hall has a wall panel line, and 25% of its business was in those panels.”

And that’s how Richard plays his cards. Asked if he’ll keep up the pace of acquisitions, he’s quick with his answer. “I want to. But they’re harder and harder to find. Many owners are aging out, but they have to sell to somebody much bigger. We look for locations near railroad lines; that’s very important. Very few lumberyards are on rail, and now it’s coming back.”

That factor helps one-up the competition—operations like Builders FirstSource. “But we leverage our purchasing power, which is pretty hard to compete against. Also, we stay ahead thanks to our wonderful people. And being centralized—estimating, drafting, IT, accounting, HR.” Plus those three full-time buyers.

It also helps mightily that “in this industry, we have great friends who happen to be our competitors. We help each other out; it’s an honor.”

That’s exactly what happened during the recent recession in finding a life-saving loan. “The huge banks were awful,” he reports: “Too big. Our revenues dropped from $62 million to $28 million. We laid off half our people. I cashed in my IRAs. They were ready to foreclose on our physical plant. We lost practically everything but my home. But then, thanks to another yard owner, I got a call from a local bank—which I never could have imagined—asking, ‘How can we help Simonson? I think we have a way….’”

Today a stronger, rebuilt Simonson Lumber boasts revenues of $75 million with 200 employees and four locations (or five or six by the time this story is printed, I wouldn’t be surprised). The out-of-the-blue 2019 purchase of competitor Mathew Hall—Richard’s 15th acquisition—provided not only a well-located showroom and a truss plant, but also increased the size of the outfit by one-third. Yet, as Richard has to laugh, not everybody trusts the boss completely. “I have no keys. Not to any of our facilities. I set off an alarm or something once, so now they won’t give me any. I’m not allowed to use the copy machine, either,” he chuckles. “But I trust our people with everything.”

Looking back, at 70, what would Richard have done differently, one asks? He’s up-front: “I’ve made so many mistakes, it’s astonishing. I don’t know how NOT to have my foot on the gas, keep on going. But—I would have built bigger; you never have enough room. And I would have fought harder to keep the yards we closed. Most of all, I wish we didn’t have to have done those layoffs….”

Looking ahead, he foresees a drop in the number of lumberyards still standing: “There will have to be. More consolidation, more automation. The labor shortage is dictating that. The competition for people will limit your size. But we [at Simonson] care about our employees the most, and that will be our biggest advantage. We give them discretion. Freedom. And as long as we can help small contractors, we’ll take that opportunity to help them, and they’ll be survivors; those people will know we’ll take care of them.

As to Richard’s own future? He doesn’t believe in retirement, probably doesn’t own a rocking chair. And he’s got great genes. “My Grandfather Nels died at 86, and he came to work the day he died.”