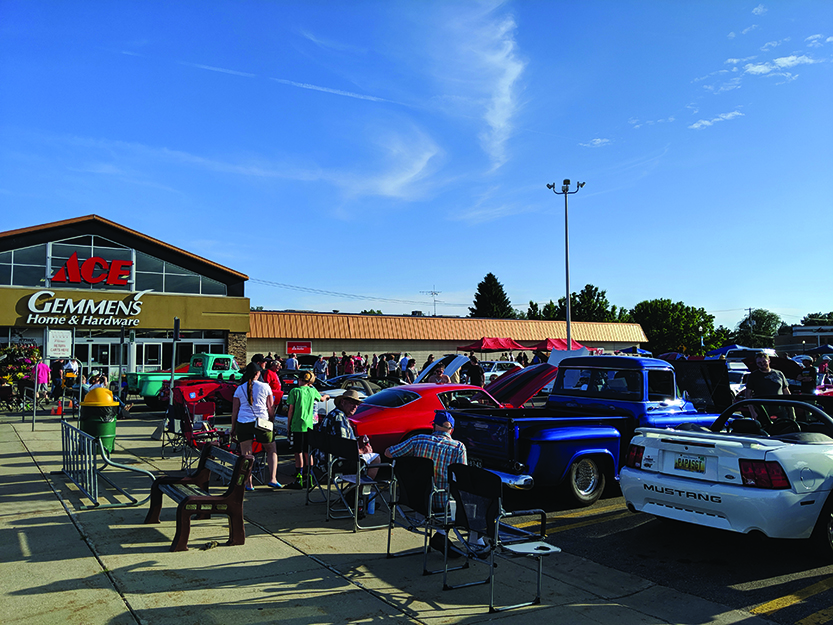 Al Gemmen might be a little surprised—and maybe more than a little startled—had he lived to learn that the store he founded in Hudsonville, Mi., in 1955 would, 65 year later, be named one of the “coolest” in Ace Hardware Corp.’s vast family.

Al died 12 years ago, after ceding ownership to his son, Doug, and his partner. Today Doug’s son, Andrew, serves as head of the outfit, which has morphed from Al’s sole employee manning a 5,000-sq. ft. space to a staff of 55 operating in 42,000 sq. ft. on the original site. Andrew’s honorary title: CEO of Cool.

Was it the addition of Carhartt clothing? Red Wing boots? Local artisans’ giftware? Mother’s and Father’s Day events? The annual visit from Santa? Or maybe the uber-popular new toy department, which has become a destination? All of the above, and more on them later. Let’s first check out how Gemmen’s has kept spirits up, for customers and staff alike, during the covid pandemic.

Sure, sneeze guards and stringent cleaning policies. But beyond that, “serving an important role as a social outlet. Never before,” notes Andrew, “has the American consumer had so much time on their hands—no kids’ ball games, no band concerts, no choir practice. Folks were virtually imprisoned, so they focused on their homes—which made us an important outlet. I’d hear, ‘My trip to Gemmen’s is the only thing I get to do’—so we were selling more than hardware; our role quickly changed to maintaining customers’ sanity.

“For the company, our biggest take-away is that our team became closer and tighter than ever before—as in a ‘We made it through something, and did it together’ bonding. From a business perspective, it caused us to define and cement our lines, from Benjamin Moore to Scott’s.

Cool, for sure. But, chances are, the award judges looked at Gemmen’s new toy department, an icon for that description. “It’s the result of extra space,” Andrew acknowledges. “Spring always is our best business season—strong L & G, patios, grills. But by summer, there’s a void. We added Carharrt, Red Wing boots and other apparel, but there was still a void—so, we tried toys.

“We’d always carried some at Christmas, but this went well beyond. In selecting them, we had two caveats: no batteries, and no computerized screens. Instead, we offered nostalgic items—things parents used to play with—Lincoln logs, puzzles, Playmobiles—as a big part of what we brought in: an eclectic mix, but of the learning type.” And it’s earning its floor space, all right: “It’s bringing in customers from far and wide who love to shop here.

“A lot of what we do,” Andrew explains, “is driven by the fact that we like to have fun! So much of our daily lives goes on within the building that we need to have fun doing it; you can only get so much enjoyment out of selling another can of paint.”

Gemmen’s also supports local artisans by offering their wares. “We are a small business, so we respect others who need visibility and exposure—makers of soap, lotions, art, even gas fireplaces, because they’re manufactured locally.”

Andrew was made locally, too, in this town of 10,000, halfway between Holland, Mi., and Grand Rapids, which he calls “the most prosperous part of the state. Lots of growth.

“I never imagined working anywhere else. As a kid, I’d wear my father’s Gemmen’s shirt as my Halloween costume!  I worked here part-time in high school and college, then later at Target, which gave me some insight into retail, a good learning experience. Then Dad let me know there was an opening in the hardware department. I was soon to be engaged, around 2000, so it sounded like a good idea.

“I came in with lots of plans, new ideas. But my first job was…” he pauses for a dose of humility… “sorting nuts and bolts. (I’d spent four year in college for this?’ I thought.) But in hindsight, it was the right idea. I worked my way up—department manager, than area manager, for 10, 15 years. And I love what I do today—commercial accounts, fostering relationships, in more of a marketing capacity.

“Our business”—80% walk-in, 20% trade—“is driven by repeat customers, and that was ingrained in my brain my entire childhood. Sure, you sell for today, but you build relationships for a lifetime. And that’s what differentiates us from a massive store: a smaller environment, where customers feel safe. The West Michigan consumer still honors those traditional values, where they can walk in and talk to someone about , say, plumbing. Where the wife may need some assistance.

“Nowadays, female shoppers are trending a little younger; they’re not used to being asked that question (‘Help you?’), so you’ve got to walk up slowly, change your posture, speak slowly. ‘No!’ they’ll answer. Then, ‘Well, actually….’ You’ve to show them how to do things.”

Gemmen’s crew is on top of that. “They’re great people,” their boss attests. “I encourage them to make their own decisions, assume control, take ownership of a customer. As our mission statement says, ‘Provide knowledgeable solutions….’”

Yes, there’s some turnover, “but that’s not all bad,” in Andrew’s experience. “It can bring new life into the business—add some fun!” And newer, younger hires tend to be more tech-savvy. “We’re very active on Facebook and Instagram, which work the best for our customer base. And internally, tech savvy is a major-major part of managing our customer base. When it comes to our inventory system, technology is our friend!” he maintains.

When it comes to customer satisfaction, Workbench is their friend. It’s the company’s name for a series of in-person clinics, focusing on subjects like lawn care, chain saw use, or paint, which draw from 10 to 40 participants, often led by a product rep.

Services like this help keep Gemmen’s abreast of the competition, which is “fierce! All the boxes, plus Amazon. Nowadays, thanks to the Internet, the transparency of pricing is much greater, and in the early 2000s, price became king: lots of bitter competition. But now, it’s not always the deal-maker; it’s also about having a good shopping experience, the relationships. There’s a perception, however, that ‘This store is not big enough [in inventory] to complete my project.’ But we are!” Andrew demonstrates. “With 42,000 sq. ft., we do have both breadth and depth.” And fun, remember, such as special events for Mothers and Fathers Days, a Yuletide Santa.

There’s always one constant factor, though, as Andrew is quick to note—and that is “Change! We’re willing to try things out, to listen to staff’s ideas. That can lead to occasional failures, too,” he’s upfront, “like adding sales of live plants; a matting and framing service; a hunting and fishing department we thought would be so popular, here so close to Lake Michigan.” But they didn’t show results. Why? “As Grand Rapids grew, more and more competition cropped up, picking off niche categories. So, to grow, we shrank categories in order to do better.”

It’s always a work in progress, and that’s a huge reason Andrew is here for the long haul. “I love the fact that every day is different, every day is a challenge. I don’t vacation well,” he laughs, “and I don’t have a lot of hobbies, so this is my life. It’s in my brain 24/7, with my wife as my sounding board and moral compass. I have such respect for the individuals who work here, and for the community we serve.” As they’d respond, ditto.