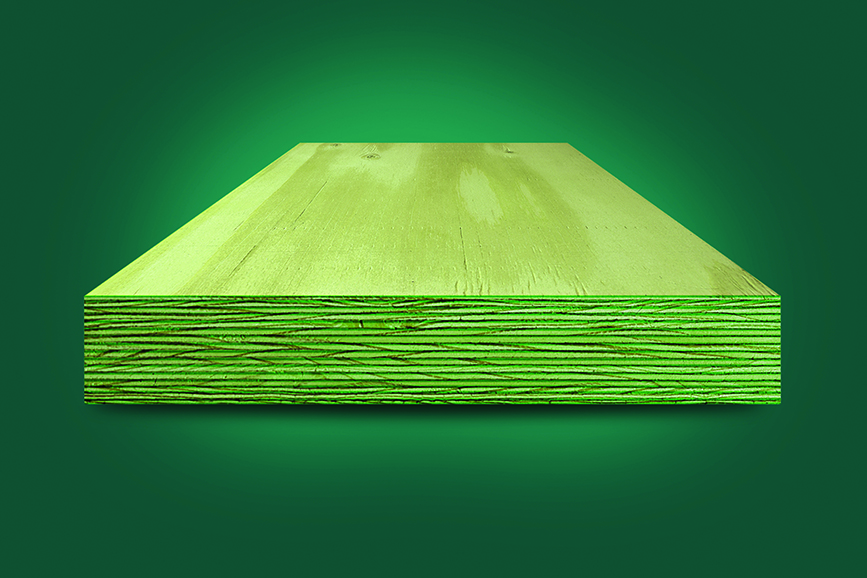 Despite an increasing percentage of decks being built of pricey composites, plastics and exotic hardwoods, the vast majority of deck framing systems continue to be constructed of standard dimensional lumber.

Now an engineered wood producer is aiming to provide a framing system that rivals the quality and performance of the finish system—a deck framing system made of pressure-treated laminated veneer lumber.

The primary obstacle to creating weather-resistant LVL had been the pressure treatment. Treating LVL with conventional methods for dimensional lumber weakens the structural properties of the product. Fortunately, PWT discovered Kop-Coat’s Tru-Core technology, which fully penetrates each veneer layer to the center then adds an envelope finish to protect each piece from the inside out. Every beam, joist and column suffers no loss of properties, and is safeguarded against damage caused by fungal rot, decay and insects.

“Normally you’re trying to push a chemical into a substrate from the outside. You leave it in a cylinder for a period of time and try to get the right retention rates or penetration rates of the chemical,” explained PWT’s Matt Caissie. “In this case, we are doing that from the inside out. We end up with a product that is uniformly treated so it can be ripped, cut, profiled and  drilled, and still not lose the protective treatment.”

He said the final product, dubbed PWT Treated, “is just as strong as it was pre-treatment, and that gives us the ability to create long spans. Designers can run wild with the structural capabilities of the product, open up sight lines below-deck, and really match up better to the high-end composites that are on the market today.”

Additionally, PWT Treated contains no additional volatile organic compounds (VOCs), and can be used both inside and out where projects call for joists to be cantilevered outside of the building envelope, creating zero-support balconies.

“The other thing with the wood vs. the metal frame is the wood has quite a bit more mass to it, and that gives you a much more solid feel when you walk across it,” Caissie added. “Also we are able to achieve much longer spans than you can with the metal systems.”

PWT Treated is lightweight and easy to handle. It allows building designers and structural engineers to work with published structural design properties to create structures that far exceed code requirements. Eased edges are applied to the beams and joists, meaning construction crews avoid splinters. It can be safely discarded with regular household waste, making job site cleanup simple and easy.

The full lineup of PWT Treated products can be designed using a layout, estimating and engineering software package called iStruct. This one-stop shop makes it easy for architects and designers to communicate with the build team, while keeping projects on time and on budget. Use iStruct to select the best products for the design, run calculations to see how the wood will perform, generate 3-D renderings to help owners visualize the project and create a full bill of materials, including hangers and accessories.

PWT has incorporated treating technology at its Burlington campus to produce PWT Treated, without reliance on a third-party wood preserver.

Planning for the product started more than four years ago, shortly after the arrival of president and CEO Jim Enright. While at Rosboro, Enright helped pioneer treated glulams, which led to growth of the overall EWP market. PWT Treated is positioned to similarly “grow the EWP pie.”

Available through PWT’s existing distribution partners, the framing system includes ledgerboard, deck joist, deck beams, columns and stair stringers. They can be factory- or field-laminated. Offered are billet beam sizes of 3-½”, 5-¼”, and 7”, plus 1-3/4”, which can be bolted, nailed or screwed together, for crews that want to handle smaller pieces rather than a larger section. Joists can be produced up to 60 ft. long and carry a 25-year warranty.

The entirely new product category has taken Pacific Woodtech back to its roots. Caissie said, “When we started selling engineered wood in the ’80s and ’90s, it was a pioneer effort—you had a piece of knowledge that everyone needed and you were able to share that and help people move ahead with their projects and it feels like that again. It feels like a refresh.”

Everyone will benefit from sturdier decks. “What’s exciting is, similar to when people moved away from just code minimums in the interior framing system, every single contractor will have an opportunity to upsell to something that’s better and still easy to work with,” he said. “And when you look at the cost of the decking, railing, lighting, furniture, hot tub, barbecue, it’s a real small upgrade to have a greatly improved framing system beneath it all. I think it’s going to catch on pretty quickly. The same way we see that interior frames are now 50% engineered, that would be an amazing goal to get there on the exterior.”

And for the future? PWT continues to explore additional applications and features for the product. Treating has opened up LVL to a world of possibilities.