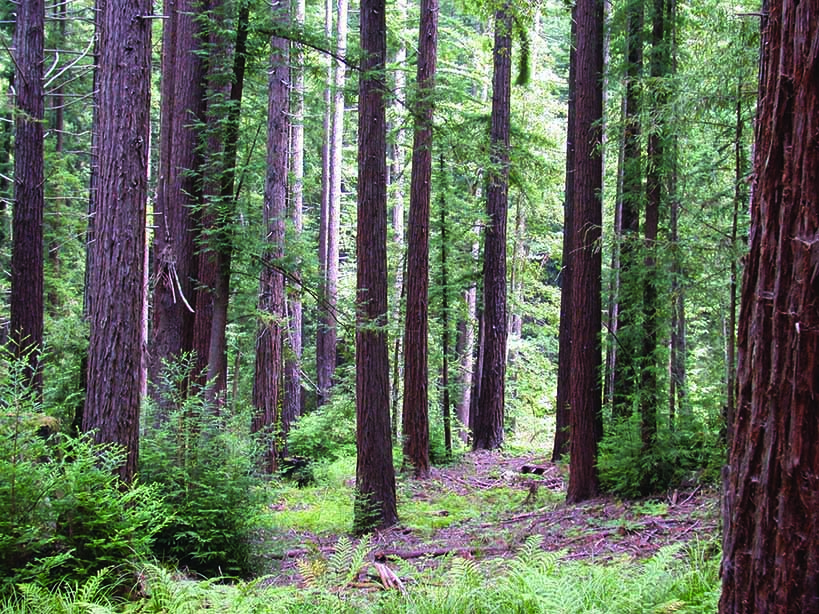 Archeology tells us that the human species made use of wood even prior to homo sapiens. The oldest recorded wood tool is a spear made of yew dating back 400,000 years. Our use of wood has dramatically expanded despite mankind’s transition to urban existence.

Far more recent and closer to home, the use of coastal redwood (Sequoia Sempervirens) as a building material began in the early 1800s when European settlers arrived in California. Initially, the extent of redwood harvesting was limited by technology and demand. Hand saws and axes were used to fell the trees and lumber was occasionally produced by straddling logs over a sunken pit and slicing the logs into lumber using a two-man crosscut saw. Needless to say, the worker with less seniority was usually the one in the pit with sawdust falling on him all day.

Increases in population and technology predictably resulted in increased harvesting of redwoods and lumber production. Two events resulted in dramatic increases in redwood harvesting in California. Coincidentally, both these events centered in San Francisco. The first was the Gold Rush (1848-1855). While very little coastal redwood lumber found its way to the gold fields, it was the dramatic expansion of San Francisco that created the demand. Fortune seekers from all over the world arrived in San Francisco by ship and began their journey to the gold fields. San Francisco grew dramatically as the result of this immigration. The city required lumber for housing and commercial development to meet the need .

The second big demand for redwood lumber resulted from the 1906 San Francisco earthquake. Ironically, most of the wooden structures in the city survived the initial jolt. Wood is far more flexible than concrete or masonry. Unfortunately, most of the wooden structures were illuminated by gas lamps. When the gas lines ruptured, the gas ignited and burned most of these buildings. Post-earthquake housing reconstruction placed incredible demands on nearby redwood forests. This was particularly true in the Santa Cruz Mountains.

By the late 1880s the increase in demand for redwood lumber, coupled with the introduction of steam-powered sawmill equipment, resulted in widespread harvesting of coastal redwoods throughout California. The harvesting method was landscape-wide clearcutting. By the mid-1920s, most of the redwood forests on the Central Coast had been cut.

Shortly after World War II, there was a resurgence in construction, particularly for single-family residences. At this time some redwood lumber producers began looking at the “second-growth” redwoods, trees that sprouted from the root systems of redwoods that had been felled during the 1800s and early 1900s. While some old-timers felt that lumber made from second growth was inferior, local people who had to rely on wood from nearby forests recognized that the heartwood in second growth redwoods had the same desirable characteristics as old growth.

The predominant center section (heartwood) of coastal redwood contains a significant amount of tannic acid, a specific type of tannin (plant polyphenol). It is this chemical that makes redwood heartwood lumber far less susceptible to decay and insect damage. While redwood lumber was also historically used for framing, today it is primarily used for external construction. These uses include fencing, decking, siding and post material.

Wood is truly our most sustainable and renewable building material. When forests are intentionally managed from a long-term perspective, they can provide complex ecosystems, carbon sequestration, water storage, and oxygen production, while simultaneously growing forest products used by virtually everyone. On the Central Coast, single tree selection was voluntarily adopted as a harvesting method by the local forestry community in the 1950s. Two decades later the counties of San Mateo, Santa Cruz, and Santa Clara formally adopted this method of harvesting as Special County Rules under California law.

A number of countries are experiencing a Renaissance in wood construction with the development of mass timber, a method of laminating wood sections to create larger construction beams. Today, the tallest mass timber building in the world is the 280-ft.-tall Mjøstårnet in Norway. This 18-story mixed-use building contains apartments, a “Wood Hotel,” swimming pool, office space, and a restaurant. It is the tallest wood structure in the world today. Tomorrow? Who knows. With wood, the sky may be the limit.